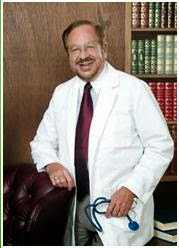 is this doc a fraudster?
My opinion.. Yes

H. Dennis Dennis Harris MD is a Medical Doctor licensed to practice in Arizona.
This licensed professional license is not current. The license was granted 04/13/1968.

(scroll to the botttom for the latest)

Dennis Howard Harris is no stranger to the courts, the legal system and others powers that be.
According to court records, this man has a history dealing with trademark infringement, bankruptcy and Conceling Assets, False Oath and CLAIMS BRIBERY and Aiding & Abetting let us not forget to mention Money Laundering!

Long before coming on board with Plexus Worldwide, Dr, Dennis Harris had his own story. One would think that he would have learned from it, but hot water with the FTC and the FDA seems to follow him around. Plexus could thank him for the products, Fast Relief, and share in the blame with the FDA's warning letter they issued to Plexus Worldwide, but Dennis Harris jumped ship along with Plexus "International President" Alfred Harris, and moved on to form GHPD, LLC.

According to the Ohio License Center: 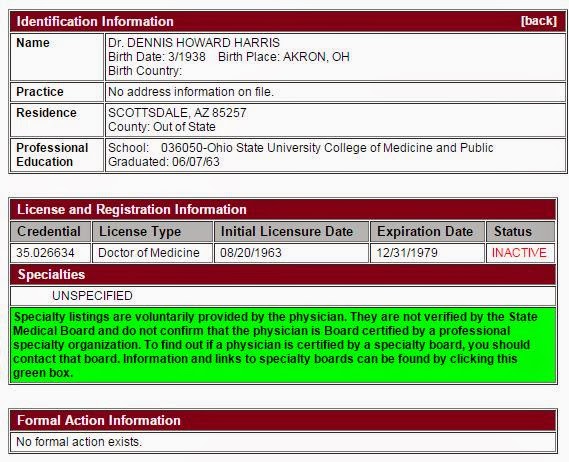 American Board of Physical Medicine and Rehabilitation

In 1973, Dennis H. Harris received his certificate. He has NO requirement or obligation to further his knowledge or explore other avenues of pain management, which he claims is his sub-speciality.

"Prior to 1993, certification by the American Board of  Physical Medicine and Rehabilitation

was granted for life. These certified physiatrists are not required to recertify or to

meet the requirements of Maintenance of Certification in this area, but are strongly

encouraged to do so in the area of their general or subspecialty practice(s)."

Companies the Doc has been associated with:

Composition and method for reducing snoring and respiratory problems

Patent number: 5618543
Abstract: A composition for reducing snoring and reducing allergy and sinus symptoms uses natural enzymes and herbs. The enzymes include protease, amylase, lipase and cellulase combined with acerola and yellowdock in a natural fiber base, preferably made of beet plant fiber. The formula preferably is administered in capsules or tablets, with doses administered according to the weight of the user.
Type: Grant
Inventors: Dennis H. Harris, Ronald E. General

Companies the Doc has been associated with:

Where is the Doc now? 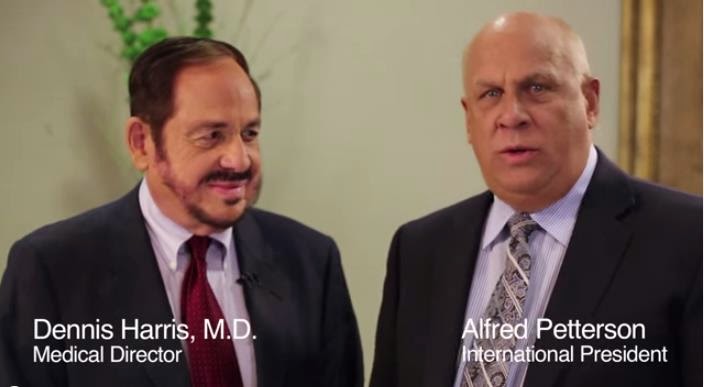 He is with his "good friend" Alfred Pettersen (of Plexus)!
They have formed their own company!

Seems like both jumped ship from Plexus at the same time. 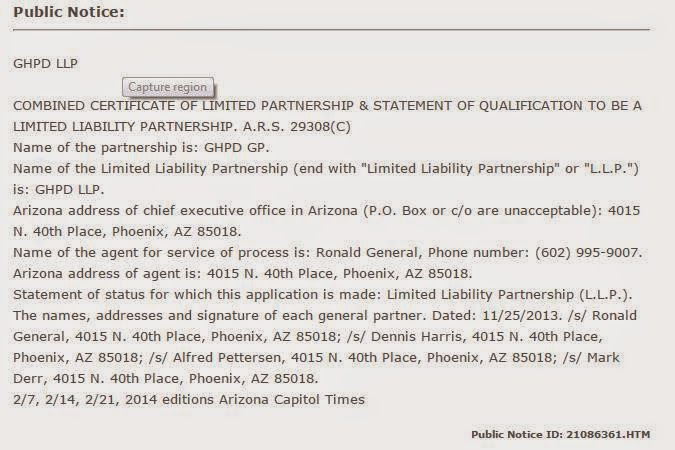 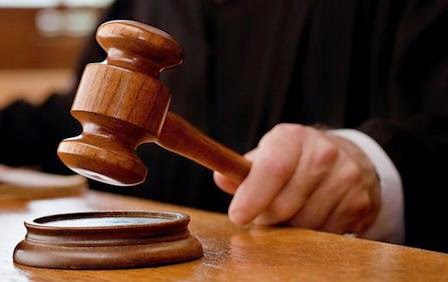 Who are Janie K Golden and Neil V Wake?
Janie is listed as the President of Beautiful Body Contouring, Inc.
Dennis is the "Director"
Arizona business info here:
Read the BBB complaint here:

Who is Desert Health Products Inc.?

On January 19, 2012, Desert Health Products, Inc. went out of business as per its Chapter 7 liquidation filing under bankruptcy. Desert Health Products, Inc. engages in the packaging, sale, and distribution of vitamins, nutritional supplements, skin care, and animal care products in the United States. The company's product lines include vitamin, mineral, and antioxidant combinations; Chinese herbal formulas based on classic Chinese formulas; specialty supplements for common ailments; weight management products, which help to reduce appetite, accelerate metabolism, diminish carbohydrate cravings; and herbal/botanical products. It also offers FemAid products support systems for women suffering from pre-menstrual syndrome, perimenopause, and menopause; ayurvedic products; skin/personal care products are designed to maintain and protect the natural inheritance of youthful smoothness and the radiant vitality of healthy skin; pet care products for nutrition and grooming for pets; burn and scald relief products; and Desert Health's foot care to treat the dry skin and other skin conditions associated with diabetes. Its other products include OXINE, a bio-degradable patented product and bio-security agent against avian influenza; a line of anti aging products; children's chewable multivitamins; products for pain management; SPF 30 Plus, an aloe vera-based sun screen product; Pregnenalone; and Dehydroepiandrosterone. Desert Health Products distributes its products through pharmacies and drugstores, and via the Internet. The company was founded in 1991 and is headquartered in Scottsdale, Arizona.
found here:


FOR RELEASE
April 15, 2003
An Arizona-based company, Snore Formula, Inc., its officers, and a distributor have agreed to settle Federal Trade Commission charges that they failed to have scientific substantiation for the claims made for "Dr. Harris' Original Snore Formula" (Snore Formula) tablets. Snore Formula is an herbal supplement purported to cure snoring. The Commission's complaint charges that the respondents made unsubstantiated claims about the tablets' efficacy in preventing sleep apnea in adult and child users and significantly reducing snoring. The Commission accepted the consent agreement subject to public comment. It requires that the respondents possess competent and reliable scientific evidence to substantiate representations that Snore Formula or any other food, drug, device, service, or dietary supplement prevents, treats, eliminates, or reduces snoring and sleep apnea in both adult or child users.
The FTC charges Ronald General and Dennis H. Harris, M.D., and their company, Snore Formula, Inc., with violating the FTC Act by failing to possess evidence substantiating their claims for Snore Formula. The FTC also charged Snore Formula distributor Gerald L. "Jerry" Harris, owner of the SnoreFormula.com Web site. According to the FTC's complaint, the respondents failed to have a reasonable basis for claims they made about their product's efficacy in: preventing sleep apnea in adult and child users who would otherwise develop sleep apnea; treating the "early stages" of sleep apnea; and eliminating, preventing, or significantly reducing snoring. The complaint alleges that the respondents failed to disclose the importance of seeing a physician for people who have symptoms of sleep apnea because the condition may be fatal. The complaint further alleges that the respondents falsely claimed that scientific testing demonstrates that the tablets eliminate, prevent, or significantly reduce snoring in 86 percent of users.
In addition, the FTC alleges that Dennis H. Harris, M.D., acting as an expert endorser for the product, misrepresented that he had sufficiently exercised his purported expertise to determine the accuracy of his claims for the product.
The consent agreement to settle the charges requires the respondents to have scientific evidence for any future claims about the effect of any food, drug, device, service, or dietary supplement on the structure or function of the human body, or about any other health benefit, or the safety, of any such product or service. The consent agreement also requires the respondents to disclose clearly and prominently that the product is not intended to treat sleep apnea and to provide a warning statement for consumers with symptoms of sleep apnea to see a physician or a specialist in sleep medicine. These disclosures must be made whenever the respondents represent that a product not shown to treat sleep apnea can eliminate, prevent, or reduce snoring.
The consent agreement prohibits Snore Formula, Inc. and its officers from providing the "means and instrumentalities" to others to make claims without scientific support about the benefits, performance, efficacy, of safety of any food, drug, device, service, or dietary supplement.
In addition, the consent agreement requires that Dennis H. Harris, M.D., sufficiently examine or test products that he endorses as an expert. Further, the proposed settlement requires the company and its officers to disseminate a copy of the order to its past and future distributors, and requires them to monitor their distributors and terminate any distributor who continues to make prohibited claims. Finally, the consent order contains standard recordkeeping requirements to allow the agency to monitor the respondents' compliance with the order.
The FTC vote to accept the proposed consent agreement was 5-0. An announcement regarding the proposed consent agreement will be published in the Federal Register shortly. It will be subject to public comment for 30 days, until May 15, 2003, after which the Commission will decide whether to make it final. Comments should be addressed to the FTC, Office of the Secretary, 600 Pennsylvania Avenue, N.W., Washington, D.C. 20580.
NOTE: A consent agreement is for settlement purposes only and does not constitute an admission of a law violation. When the Commission issues a consent order on a final basis, it carries the force of law with respect to future actions. Each violation of such an order may result in a civil penalty of $11,000.
Copies of the complaint, the proposed consent agreement, and an analysis to aid public comment are available from the FTC's Web site at http://www.ftc.gov and also from the FTC's Consumer Response Center, Room 130, 600 Pennsylvania Avenue, N.W., Washington, D.C. 20580. The FTC works for the consumer to prevent fraudulent, deceptive, and unfair business practices in the marketplace and to provide information to help consumers spot, stop, and avoid them. To file a complaint, or to get free information on any of 150 consumer topics, call toll-free, 1-877-FTC-HELP (1 877-382-4357), or use the complaint form at http://www.ftc.gov. The FTC enters Internet, telemarketing, identity theft, and other fraud-related complaints into Consumer Sentinel, a secure, online database available to hundreds of civil and criminal law enforcement agencies in the U.S. and abroad. 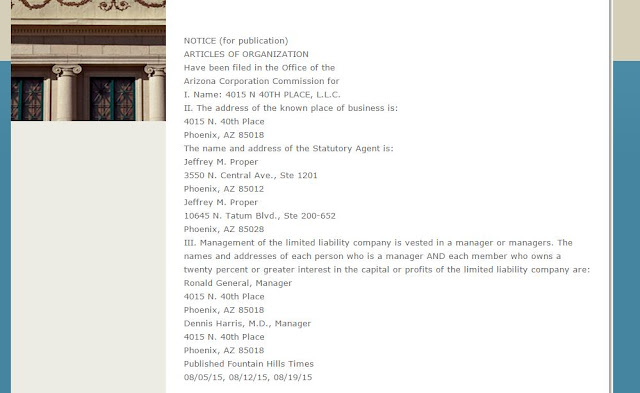 Random Stuff yet to be confirmed, but put here anyways:

ARTICLES OF INCORPORATION OF ADVANCED NUTRITION TECHNOLOGY, INC. We, the undersigned, have this day associated ourselves together for the purpose of forming a corporation for profit under the laws of the State of Arizona, and particularly under Chapter I of Title 10, Arizona Revised Statutes, and we do hereby adopt Articles of Incorporation, as follows: 1. Name. The name of the Corporation is Advanced Nutrition Technology, Inc. 2. Purpose. The purpose for which this Corporation is organized is the transaction of any or all lawful business for which corporations may be incorporated under the laws of the State of Arizona, as they may be amended from time to time. The Corporation shall initially engage in the business of distributing natural health products. 3. Authorized Capital. The total number of shares of all classes of stock which the Corporation shall have authority to issue is 3,000,000 shares of common stock, at zero ($0.00) par value each. 4. Issued Capital. Initial distribution is a total of 1,000,000 shares to Ronald E. General, 1,000,000 shares to Scott W. Christensen. 5. Statutory Agent. The name and address of the initial statutory agent of the Corporation is RONALD E. GENERAL, 4015 North 40th Place, Phoenix, Arizona 85018. 6. Fiscal Year End. The Corporation shall initially have a fiscal year end of December 31St. IN WITNESS WHEREOF, I, the undersigned Incorporators and initial Board of Directors of the said Corporation have executed the within Articles of Incorporation this 12th day of June, 2002. /s/ Ronald E. General /s/ Scott W. Christensen Ronald E. General Scott W. Christensen 4015 North 40th Place 5135 E. Whitton Phoenix, AZ 85018 Phoenix, AZ 85018 Oct 16, 17, 18, 2003/183949